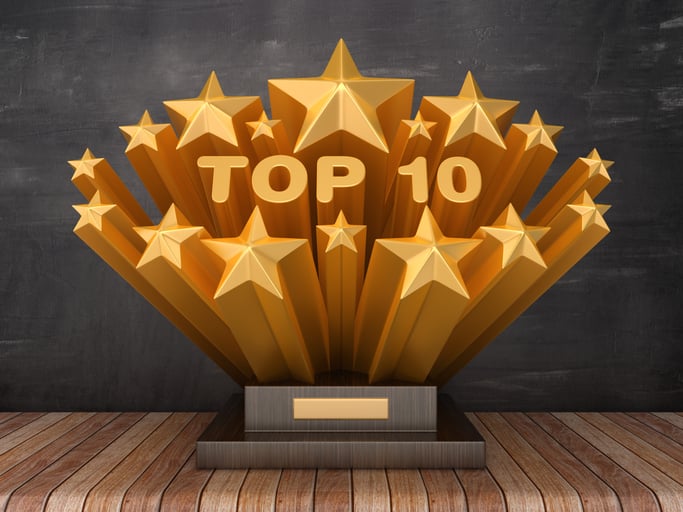 In 2019 Courtroom View Network’s cameras gave members of the public front row seats to high-stakes civil trials throughout the United States. As the only news media outlet dedicated to gavel-to-gavel video coverage of civil trials that matter to the legal community, CVN spent the year filming the country’s premier civil trial attorneys in action.

CVN webcast many trials that made national headlines, while also shining a spotlight on trials attorneys care about that otherwise would fall through the cracks in an era of shrinking newsroom budgets. Over the year CVN’s cameras were present for consequential verdicts in everything from major bellwether trials to “everyday” negligence cases ending in high-dollar awards.

These are our picks for the Top 10 Most Impressive Plaintiff Verdicts that CVN covered in 2019. They are not ranked solely by amount awarded. Instead we also took into consideration the facts of the case, the parties and attorneys involved, and the potential broader impact of the verdict.

The 10 trials listed here are only a fraction of the cases CVN covered in 2019. Become a CVN subscriber for $99/month with no contract and get access to everything in CVN’s one-of-a-kind online trial video library. It’s the only online video collection of civil trials anywhere in the world, and the hundreds of trials it contains (including expert witness testimony, and images of critically important exhibits and demonstratives) make it an invaluable resource for law firms large and small.

While not a jury verdict, this award following a nearly two-month bench trial is the clear choice for most impressive plaintiff trial outcome CVN covered in 2019.

From May through late July of last year, Judge Thad Balkman’s Norman County courtroom became the eye at the center of the hurricane that has become the massive legal fallout from the sprawling opioid epidemic.

The trial in this case brought by Oklahoma Attorney General Mike Hunter marked the first time arguments were made at trial, in open court, involving a drug company’s supposed responsibility for the opioid addiction crisis.

Hunter’s office, supported by a slate of private firms, originally sued a large number of drug companies, but only Johnson & Johnson remained in the case when it went to trial.

Although Judge Balkman’s award of $465 million is significantly less than the $17.5 billion the state sought, it is nonetheless a massively important trial outcome with the potential to impact opioid cases pending nationwide.

In 2015 a collision between a semi-aquatic, World War II-era “duck boat” and an oncoming bus left five people dead, 60 people injured, and spawned dozens of lawsuits seeking to hold the tour group company that operated the duck boat responsible.

This January, following a trial that spanned nearly three months, a Seattle jury sided with 44 victims and their families - an outcome that helped spur the resolution of numerous related cases.

From the expert witness testimony related to the products liability claims in the case, to the logistics - both legal and emotional - of conveying to jurors the varied range of individual injuries and losses suffered by 44 separate plaintiffs, this high-stakes juggling act of a jury trial was a truly gargantuan undertaking and earned the #2 spot on our list.

When it comes to video coverage of the thousands of “Engle progeny” tobacco lawsuits slowly working their way through Florida’s courts, CVN is the news media organization of record. CVN has filmed nearly every Engle case to date since cases began going to trial almost a decade ago.

The $157 million awarded in November by a Broward County jury, including $148 million in punitive damages, is the largest Engle verdict of 2019 and the largest since 2014.

The verdict also stands out for being the first wrongful death tobacco case brought by a same-sex surviving spouse in Florida.

Both plaintiff attorneys are veterans of Engle tobacco trials, but nonetheless their 11-attorney firm is dwarfed by the national defense powerhouses Philip Morris and RJ Reynolds brought in, and their win here earns the number 3 spot on our list.

At first glance it may seem strange to highlight a case that hasn’t seen any damages awarded yet, but the facts the plaintiff had to overcome at trial show why it earned the number four slot on our list.

Blaming a cyclist’s collision with an oncoming vehicle on a dangerous road condition is hard enough, but the driver of the oncoming car in this case was high on meth at the time and is currently serving a lengthy prison sentence for the crash.

The San Diego County jury could have easily found the accident was solely the fault of a meth-addled driver (an argument the city made at trial), but decided instead that a dangerous “blind corner” in a city park played a role. Despite their assigning the City of San Diego only 27 percent liability, the plaintiffs cleared the extremely difficult bar in this bifurcated trial of getting to a damages phase.

Plaintiff Juan Vinolo’s attorneys told CVN damages in the second trial could surpass $60 million. They added that under California law, the city would have to pay 100 percent of Vinolo’s medical and earnings damages and then 27 percent of his and his wife’s general damages.

CVN hopes to cover the damages phase sometime in 2020.

The plaintiff verdict that stands out among them, and earns the number 5 spot on our list overall, came last June when an Alameda County, California jury returned a $12 million verdict at the first trial involving both Johnson & Johnson and Colgate Palmolive as defendants.

A trial victory against either of these companies and their phalanx of defense firms is a major win for a 21-attorney plaintiff firm, but achieving a jury win against both simultaneously in the critical asbestos hub jurisdiction of Alameda County gives this verdict special consideration.

$8.6 million awarded to family of stuntman who died on set of “The Walking Dead”

Following one of the most high-profile civil trials in Georgia in 2019, a state court jury in December handed down an $8.6 million verdict for the 2017 fall that killed a stuntman on the set of The Walking Dead.

Jurors deliberated for the better part of three days before reaching their verdict, which found the production studios and personnel overseeing filming of the stunt responsible for the 20-plus-foot fall that killed John Bernecker, 33. However, jurors cleared AMC Networks, the company that owns and airs the zombie apocalypse series, and Austin Amelio, an actor involved in the stunt scene, of liability.

Bernecker himself was found 6% at fault for the accident, likely reducing the post-verdict award to $8.084 million.

Bernecker’s parents claim a lack of appropriate safety measures caused their son to miss his mark on a 10 x 10-foot safety pad, hitting the unprotected ground beneath the balcony.

The six-day trial focused in large part on whether Stalwart Films, a production company overseeing filming of the scene, employed sufficient safety measures for the stunt. During closings, Harris Lowry Manton’s Jeffrey Harris, representing Bernecker's mother, told jurors Stalwart and the production crew failed to provide a large enough safety pad or safety spotters for the stunt, despite encountering difficulty on an earlier balcony fall.

A California state court jury in July awarded $3.8 million to a former high school student who blamed inadequate security policies for the serious injuries he suffered in a 2013 school shooting, in the first such case of its kind to go to trial in nearly 25 years

Plaintiff Bowe Cleveland was shot in the chest with a shotgun by fellow Taft Union High School student Bryan Oliver. Cleveland accused school administrators of failing to prevent the shooting by not acting on a pattern of troubling behavior from Oliver, including making threats to other classmates and disturbing drawings.

He told CVN after the conclusion of the trial that the highest pre-trial settlement offer was $700,000, and that the school district later approached him with a high/low agreement of $5 million and $1 million, subsequently increased to $2 million, but the case proceeded to a verdict without an agreement in place.

After an initial jury in the case deadlocked in February, another Florida jury in August awarded $30.8 million to a woman who suffered a catastrophic brain injury, after finding Devon Dwyer’s drunk driving caused him to hit Jacquelyn Faircloth on Tallahassee’s West Pensacola Street in November 2014.

Dwyer, then 20, had left Potbelly’s, a bar near the Florida State University campus, moments before the crash, while Faircloth, then 18, had left Cantina 101, another area bar. Both had been drinking.

The collision left Faircloth with severe brain damage, unable to communicate verbally or care for herself.

Dwyer, who fled the scene, was ultimately arrested and sentenced to two-and-a-half years in prison for the incident.

Faircloth’s attorneys contend that the bars that served the underage drinkers were responsible for the wreck. Cantina 101 admitted liability for the incident.

However, Main Street Entertainment, the owner of Potbelly’s, argued Dwyer was not drunk when he hit Faircloth.

Steve Vartazarian ended 2019 by being named Trial Lawyer of the Year by the Consumer Attorneys Association of Los Angeles, or CAALA, a prestigious recognition he discussed in-depth in a recent interview with CVN.

He started the year with the kind of trial outcome that helped define Vartazarian’s rapid rise to the upper echelons of California personal injury attorneys - specifically turning down a big settlement offer and landing a substantially larger jury verdict.

In February a Los Angeles County jury awarded over $11 million to the widow of a man who died after slamming into the back of a big rig truck whose driver illegally parked on the side of a freeway to urinate.

The accident occurred when Tri-Modal driver Jorge Garcia parked his big rig on the paved shoulder of the transition lane between the SR-60 and SR-71 freeways in Pomona. Shortly afterward, a box truck carrying Jose Garcia as a passenger crashed into the back of the big rig, after the box truck’s driver suddenly swerved to avoid another vehicle that cut it off. The impact killed both Jose Garcia and Jorge Garcia.

Vartazarian told CVN the award surpassed both his highest settlement demand of $5 million and the $8 million in maximum insurance coverage available to Tri-Modal under policies from Travelers and Zurich.

After an appeals court reversed that decision and reinstated the case, a jury in February awarded Fowler $2.38 million.

Fowler’s attorneys overcame a significant hurdle in securing a jury verdict despite her husband, Willis Edenfield, passing away before giving a deposition. They instead told jurors the case would rely on circumstantial evidence and documentary evidence like invoices to prove Union Carbide’s asbestos was present at Edenfield’s worksite, along with testimony from two of Edenfield’s former co-workers.

In addition Union Carbide, a subsidiary of Dow Chemical, has been defending asbestos lawsuits for decades and was represented by one of the largest national defense firms in the country. While the jury did decline to award any punitive damages, their compensatory award against a major defendant in the important asbestos hub jurisdiction of Middlesex County gave this verdict the edge to close out our top 10 list for 2019.