Two years ago the idea of holding jury trials over Zoom rarely crossed the mind of attorneys, and most probably thought binding jury verdicts in an entirely virtual setting were impossible. Even as the pandemic shut down trial dockets across the country, especially in civil cases, courts and litigants viewed virtual trials with healthy skepticism.

What a difference a year makes. With the second half of 2021 quickly approaching, courts throughout the United States have rapidly adopted virtual trials and seen widespread success in getting many cases to trial that would otherwise continue to languish as the pandemic drags on.

As the only news gathering organization dedicated to gavel-to-gavel video coverage of civil trials, Courtroom View Network began covering virtual trials, adding them to our virtual trial library along with hundreds of in-person civil jury trials. Today CVN is the only source available to watch numerous gavel-to-gavel virtual trials in a range of practice areas, in order to see firsthand what this new generation of trials looks like.

Here’s a breakdown of all the virtual trials recorded to date by CVN. A few are still in the process of being added to our archive, but once they are subscribers will get unlimited on-demand access to the full proceedings for just $99/month with no contract.

Are you involved in or know about an upcoming trial (virtual or otherwise) you think would generate interest within the legal/business/educational communities that CVN serves? Please drop us a line and let us know about it.

Florida Fourth Circuit Court Judge Bruce Anderson and attorney Matthew Kachergus appearing over the Zoom video platform during what is believed to be the nation's first fully remote civil jury trial to reach a binding verdict.

Jurors last August awarded more than $354,000 to a Florida woman for the beating she suffered at the hands of a Jacksonville strip club’s bouncers, handing down what is believed to be the nation’s first binding verdict in a fully remote, state court civil jury trial.

The verdict includes $300,000 for Cayla Griffin’s pain and suffering and more than $54,000 for  medical expenses stemming from a February 2018 beating by bouncers at Jacksonville's Paradise Gentlemen’s Club. And it concludes a one-day, damages-only trial over the Zoom platform against the club’s owner, Albanese Enterprise, Inc.

From the remote trial of K.B. Mathis P.A. v. Argyros.

Last October jurors awarded roughly $36,000 to a Florida law firm at trial over fees it sought to collect from a woman it represented, wrapping the Florida Fourth Circuit’s second fully remote jury trial in as many months.

The verdict found Agatha Argyros breached her contract with K.B. Mathis P.A. and awarded the lion's share of the more than $55,000 the firm said was still due in attorney fees for Kelly Mathis’s representation of Argyros on criminal, gambling house charges. 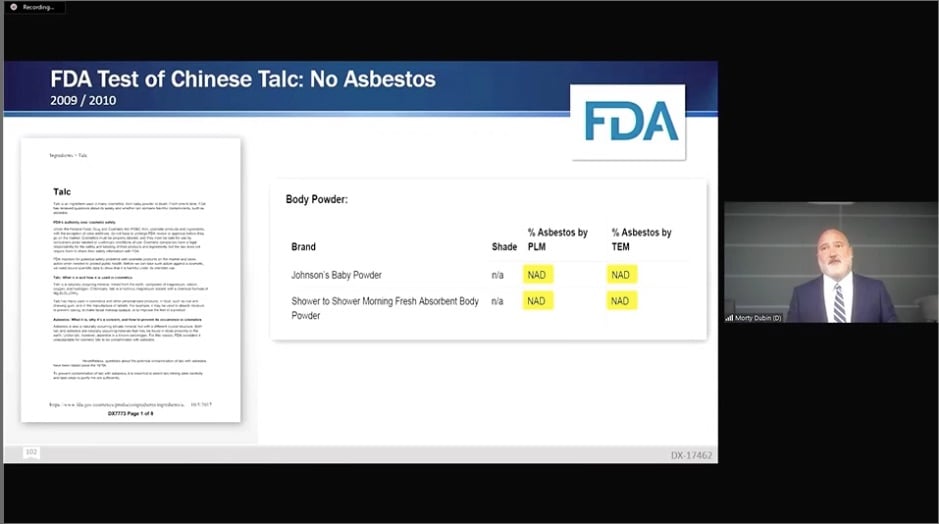 The first cosmetic talc trial held virtually over Zoom ended in a mistrial last November, when a California state court judge informed jurors the plaintiff entered hospice over the weekend and is no longer able to communicate with his attorneys.

The case was closely watched by attorneys and stakeholders nationwide as a test of how talc cases could take place virtually moving forward. Judge Kaus referenced the importance of this initial trial in thanking the jurors for their service.

This trial, which ended last March with a 1,067,000 verdict, involved a plaintiff who suffered a traumatic brain injury while working on a tug boat.

Seattle has since become one of the leading jurisdictions in the country in terms of regularly bringing cases to trial using the Zoom platform, which attorneys and judges taking interest in how Seattle’s courts have implemented procedures that resulted in numerous successful trials.

This case was the first virtual trial recorded by CVN in Seattle, so coverage is limited to openings and closing statements only.

Following up on CVN’s successful coverage of the Nugent case, CVN received permission for gavel-to-gavel recording, including witness testimony, of an asbestos trial which ended in a defense verdict last March.

The case involves a retired boiler worker who claims he developed mesothelioma, a rare form of fatal cancer often associated with asbestos exposure, while working in the U.S. Navy and then later as a civilian at the Puget Sound Naval Shipyard during the 1970’s.

Four major pharmaceutical companies went to trial last month in California state court over allegations that their marketing of prescription painkillers contributed to the ongoing opioid addiction crisis, and the proceedings are being webcast gavel-to-gavel on a 30-minute delay by Courtroom View Network.

Johnson & Johnson, Teva Pharmaceutical Industries, Endo International and AbbVie face accusations in a civil lawsuit filed by Santa Clara, Los Angeles and Orange Counties and the City of Oakland that they aggressively marketed opioid-based painkillers while downplaying the risk of addiction. The lawsuit seeks $50 billion in damages.

Please note footage from this trial has not yet been added to the video library but will be made available after the trial concludes. Live and on-demand audio of the proceedings is available to CVN subscribers pre-verdict.