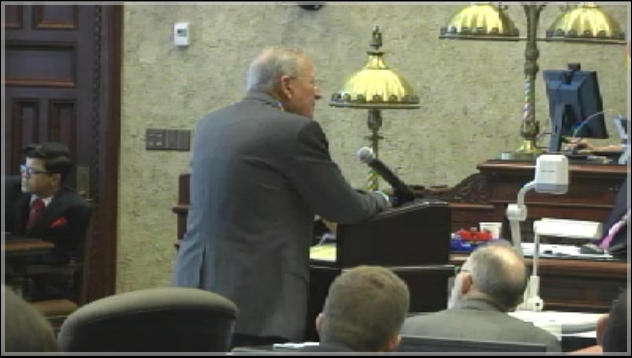 Philip Gerson delivers the opening statement on behalf of his client, Tina Russo, who claims Philip Morris and R.J. Reynolds are liable for her mother's COPD.

Miami—Trial opened Friday in a woman’s suit seeking millions from two tobacco manufacturers she claims were responsible for the respiratory disease that required her mother’s lung transplant and ultimately led to her death. Russo v. Philip Morris, 2007-44469-CA-01.

Tina Russo contends her mother Phyllis Frazier’s 30 years of smoking were driven by R.J. Reynolds and Philip Morris-led concealment of smoking’s dangers. Frazier quit smoking in 1992, one year after being diagnosed with chronic obstructive pulmonary disease that ultimately required a lung transplant. She subsequently died in 2012 from skin cancer that had spread to her brain. Russo’s attorneys contend the cancer spread because Frazier’s immune system was weakened by drugs intended to combat her body’s rejection of the new lungs.

The defense acknowledged what Shook Hardy’s William Geraghty described as “wrongheaded” claims by the tobacco industry, but argued Frazier’s smoking was not influenced by tobacco marketing. During openings, Geraghty, representing Philip Morris, told jurors there was no evidence tying Frazier’s smoking decisions to tobacco industry messaging. “Phyllis Fraizer wasn’t paying attention to anything cigarette companies were saying. She wasn’t waiting for Philip Morris or R.J. Reynolds to tell her ‘Cigarette smoking is dangerous, and you need to quit,’” Geragthy said. “Phyllis Frazier and only Phyllis Frazier made those decisions.”

The suit is one of thousands of similar Engle progeny lawsuits filed against tobacco companies in Florida. The cases arise from a 2006 Florida Supreme Court decision decertifying Engle v. Liggett Group Inc., a class-action tobacco case originally filed in 1994.

This is not the first trip to the courthouse for Russo, and the case has already played a key role in Engle litigation. The appeal of the first Russo trial served as the basis for  Florida Supreme Court ruling earlier this month holding that the state's statute of repose does not require plaintiffs to prove reliance on tobacco industry fraud within the law’s 12-year timeline. That holding renders it easier for Engle plaintiffs to win punitive damages at trial.

The trial is expected to last two weeks. Neither the parties' attorneys nor their representatives could immediately be reached for comment.

Arlin Crisco can be reached at acrisco@cvn.com