Billions of dollars were at stake in CVN-covered trials throughout Florida in 2016. However, the two lawyers who earn this year’s title as CVN Florida Plaintiff’s Attorneys of the Year spearheaded a win in a landmark trial over celebrity privacy that ultimately toppled a media giant.

The verdict: Jurors awarded Terry Bollea $140.1 million, including $25 million in punitives, in his invasion of privacy suit against Gawker Media, its founder, and its former editor.

The details: Terry Bollea, better known as wrestling superstar Hulk Hogan, sued online media empire Gawker Media, claiming the company invaded his privacy and damaged his reputation when it published a clip of a sex video taken without Bollea’s knowledge by a friend of the wrestler's. Gawker, which received the tape from an anonymous source and which it published with commentary by editor A.J. Daulerio, claimed the video was newsworthy based on Bollea's celebrity status and his public discussion of his sex life.

The trial focused on standards of journalism and Gawker’s own business goals, with Vogt portraying Gawker founder Nick Denton as a mogul obsessed with driving viewers to his sites at any cost. "They knew it was wrong, they knew it was an invasion of privacy, they told other people and they did it anyway," Vogt said. "We will prove they crossed the line." 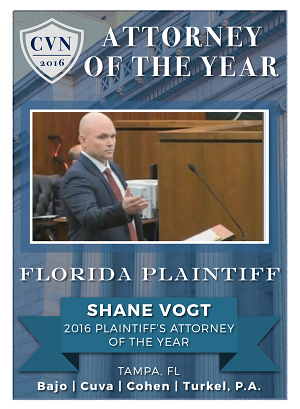 In closing statements of the punitive phase, Turkel told jurors the trial would serve as notice to other media sites regarding the limits of their coverage. “You send a message, you make a statement; that statement is 'We’re going to draw the line,'” Turkel said. “Literally, you draw the line at the publication, without consent, of a private act accorded in a private bedroom.”

The trial and its stunning verdict made headlines nationwide and ultimately forced Gawker into bankruptcy. The case launched discussions on journalistic ethics, celebrity rights to privacy, and, when it was discovered PayPal co-founder Peter Thiel bankrolled the suit after Gawker allegedly outed him in a publication, the role the wealthy play in shaping media coverage.

But the landmark verdict itself was driven by the courtroom work of Turkel and Vogt. Their win in one of the country’s biggest trials of 2016 earns them Florida Plaintiff’s Attorney of the Year honors.