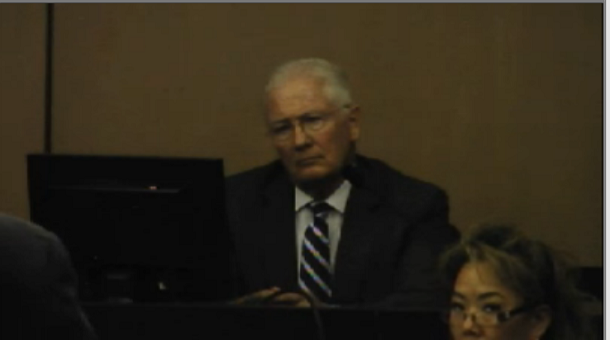 Dr. Richard Mitchell testifies at trial over the death of 21 polo horses who died after being given a compound that contained 100 times the amount of intended Selenium. Plaintiffs, the horses' owners and insurer are seeking more than $4 million from defendants, Franck's Lab, pharmacist Anthony Campbell, and veterinarian James Belden.

West Palm Beach, FL—A veterinarian was not obligated to double-check the ingredients of a prescription supplement that ultimately killed 21 polo horses, a veterinary sports medicine expert told jurors as trial continued in a suit against the compounding pharmacy that produced the supplement and the vet that ordered the prescription. Quorum Management v. Franck's Lab, 2010-CA-009112.

Dr. Richard Mitchell, who practices equine medicine, told jurors Dr. James Belden, a veterinarian who ordered a prescription supplement for a team of polo horses and its traveling vet before a major polo tournament, reasonably relied on pharmacists from Franck’s Lab to properly produce the supplement, and was not negligent in ordering the supplement delivered to the team’s traveling vet without checking its contents.

“Dr. Belden had a relationship with the team,” Mitchell said. “However (the travelling team vet) was the one actually doing most of the contact work, and (he) better than anyone knew which horses were going to be more benefitted from this product than others.”

Plaintiffs are seeking more than $4 million in the case.

Mitchell compared the relationship between Belden, the horses’ owners, and Franck’s Lab to human patients, doctors, and their pharmacists. “You get a prescription from your doctor, you pick up the bottle at the pharmacy,” Mitchell said. “How do you know the right product’s in it, unless a licensed certified pharmacist packaged it?”

When asked whether the doctor is responsible if the pharmacist fills the prescription incorrectly, Mitchell answered “No sir.”

Mitchell told jurors the bottles' labels did not specify the amounts of each ingredient making up the supplement and would not have given Belden any warning the supplement was incorrect even if he had checked them. “The way the label was made it looked like the printing was too big and the number of products was too big for the label (Franck’s) had to put on the bottle, and they literally couldn’t get all the information on the bottle,” Mitchell said. “They got all the product names on the bottle, but not content.”

On cross-exam, Mitchell acknowledged Belden bore specific duties as the dispensing veterinarian for the supplement. “The dispensing veterinarian has a responsibility to provide the correct formulation and to request it,” Mitchell said. However, “He has no means of being able to determine, in an analytical sense, how much Selenium is in that bottle.”

Although the sides agree the supplement was compounded with erroneous information that killed the horses, they differ on who is responsible and what the horses are worth. Defendants contend that a pharmacist not involved in the trial, Nefertiti Abdullah, is at fault, while Franck’s Lab contends that plaintiffs have inflated the horses’ value.

Closings in the case are expected to begin on Friday.