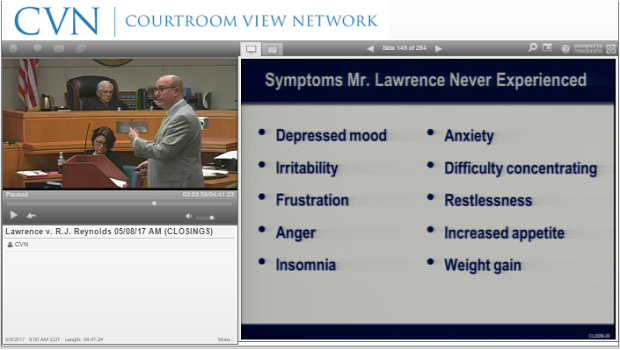 Update: Parties reached a settlement before the punitive phase of trial was scheduled to begin Wednesday.

The Florida Fifth Circuit Court jury in Marion County deliberated for nearly nine hours before handing down its decision, which found Reynolds responsible for the smoking-related laryngeal cancer that ultimately killed Louis Lawrence, 71, in 2013.

Lawrence, a smoker for about 40 years, lost his voice box in a 1995 bout with cancer. His wife, Joy, claims Reynolds’ involvement in a vast scheme to hide the dangers of smoking hooked her husband on cigarettes and ultimately killed him.

However, jurors apportioned only 35% of responsibility to the cigarette maker, allocatingthe remaining share to Lawrence himself.

Joy Lawrence’s attorney, Avera & Smith’s Mark Avera, requested about $6.6 million in compensatories, plus a finding that punitives were warranted, during closing arguments Monday.

The nine-day-long first phase of trial focused largely on whether Lawrence was addicted to cigarettes and Reynolds’ role in his smoking. During Monday’s closing arguments, Avera & Smith’s Rod Smith, representing Lawrence’s widow, said Lawrence was one of millions of youngsters targeted by the tobacco industry as “replacement smokers” to fill the gap left by older smokers who died from tobacco-related disease. “When R.J. Reynolds got a 15-year-old regular smoker like Louis Lawrence, it was like hitting a small jackpot. They could count on that smoker,” Smith said, “And they could keep him smoking for decades.”

But the defense, spearheaded by Jones Day’s Kevin Boyce, argued Lawrence smoked by choice, not out of addiction. Boyce told jurors Lawrence smoked for decades without even expressing a desire to quit. Boyce added Lawrence ultimately stopped smoking in his first serious quit attempt and did not bear many of the hallmarks of an addicted smoker.  “When there’s not even an effort to stop and you’re just smoking because you want to, that’s not evidence that addiction is a legal cause of a behavior,” Boyce said. “In those facts, which is what we see with Mr. Lawrence, the only legal cause of what happened is the smoker.”

Joy Lawrence is represented by Avera and Smith’s Mark Avera and Rod Smith.