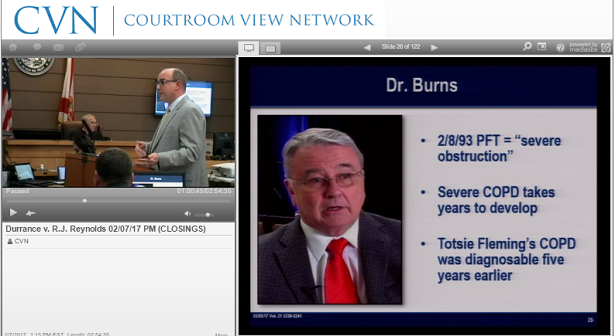 Kevin Boyce tells jurors Totsie Fleming knew or should have known she had smoking-related respiratory disease on or before May 5, 1990, a statutory cutoff date for her family's action against cigarette maker R.J. Reynolds. Jurors Wednesday found the suit time barred.

Sebring, FL—R.J. Reynolds Wednesday prevailed in a suit by the family of a Florida woman who died from respiratory disease after smoking for 60 years, as jurors declared the claim time barred. Durrance v. R.J. Reynolds, 11-26-GCS.

The 10th Circuit Court jury deliberated for less than four hours before concluding that Totsie Fleming knew or should have known she had chronic obstructive pulmonary disease, or COPD, on or before May 5, 1990, the statute of limitations' cutoff date in a class action by Florida smokers against the nation’s tobacco companies.

Fleming, 77, who worked for years as the secretary to the Avon Park, Florida Chief of Police, died in 2009 of smoking-related COPD. Her family claims R.J. Reynolds, makers of the Winston cigarettes Fleming smoked, caused her death by hiding the dangers and addictiveness of their product throughout much of the 20th century.

Gordon & Doner’s Gary Paige, representing Fleming’s family, had requested $6 million in compensatory damages, or $1.5 million for each of Fleming’s four children, plus a finding punitives were warranted during Tuesday’s closing arguments.

The case is one of thousands that stem from Engle v. Liggett Group Inc., a 1994 Florida state court class-action lawsuit against Reynolds and the nation's other tobacco companies, in which jurors found for the plaintiffs. The state's supreme court later decertified the class, but ruled Engle progeny cases may be tried individually. Plaintiffs are entitled to the benefit of the jury's findings in the original verdict, including the determination that tobacco companies placed a dangerous, addictive product on the market and hid the dangers of smoking, if they prove the smoker at the heart of a case suffered from nicotine addiction that was the legal cause of a smoking-related disease after May 5, 1990 and before November 21, 1996.

The eight-day trial turned on whether Fleming developed respiratory disease and knew or should have known of her condition on or before the May 5 cutoff date. During Tuesday’s closing arguments, Searcy Denney’s Brian Denney, representing Fleming’s family, told jurors medical records showed Fleming, who was diagnosed with COPD in 1993, had no reason to believe she suffered from the disease before the cutoff date. Denney told jurors Fleming did not complain of respiratory problems during doctor visits in 1987 and 1989, and her chest X-rays taken in both years were normal. “The doctors at the time didn’t feel the need to order any tests for COPD, they didn’t recommend inhalers, or any of that kind of stuff,” Denney said. “She had no reason to believe that she was sick because she wasn’t sick.”

But the defense argued Fleming’s 1993 COPD diagnosis showed a woman who had suffered from the disease long before the 1990 cutoff date. During Tuesday's closings, Jones Day’s Kevin Boyce, representing Reynolds, told jurors pulmonary function tests showed Fleming had lost about 60% of her lung function by 1993. “That is severe COPD that they’re telling you that she had in February of 1993,” Boyce said. Boyce reminded jurors pulmonologist Dr. David Burns testified a pulmonary function test performed before the 1990 cutoff would likely have shown Fleming had COPD, and her history of bronchitis should have placed her on notice of the disease. “It takes time (for COPD) to develop. Years,” Boyce said.

While the jury concluded Fleming’s nicotine addiction and her history of smoking Reynolds cigarettes was the legal cause of her fatal COPD, its finding on the statute of limitations issue mooted its determination on the issue of cause.

Neither the parties’ attorneys nor Reynolds representatives could immediately be reached for comment.