CVN’s unequaled Engle progeny tobacco trial coverage spotlighted a host of headline grabbing moments in 2019. The ongoing litigation includes thousands of cases spun from a decertified class action against the country’s tobacco companies. And, for more than a decade now, Engle progeny trials have seen the country’s best attorneys in courtrooms across Florida.

CVN’s Engle Plaintiff’s Attorneys of 2019 are a pair that served as the common link through a blockbuster trio of trial wins. 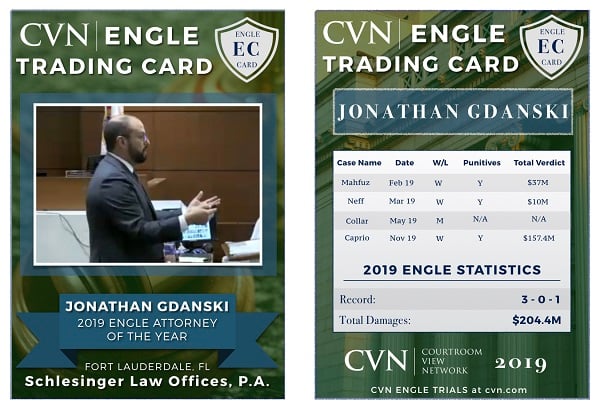 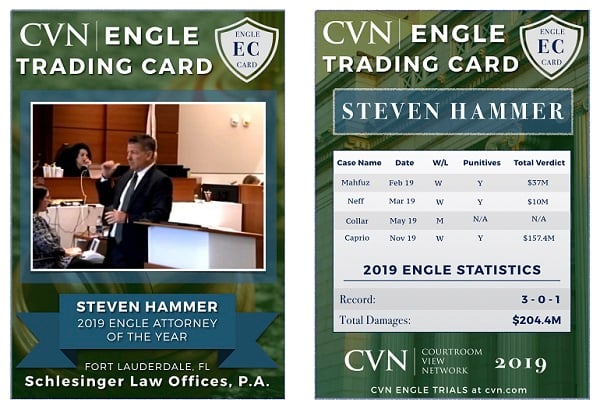 The Verdicts: Hammer and Gdanski roared into 2019 with a $37 million win in February’s Mahfuz trial, ultimately the third biggest CVN-covered Engle verdict of the year. They followed that up the next month with a $10 million win in Neff.  May’s Collar case ended in a mistrial six days into testimony, due to the death of the plaintiff. However, the pair, along with Scott Schlesinger, wrapped the year with a massive $157 million verdict in Caprio, a landmark Engle case that yielded the largest award in years.

The Details: It was a towering year for the Schlesinger Law Offices, P.A. team of attorneys. Brittany Chambers was an integral part of the Mahfuz trial, while Scott Schlesinger spearheaded the $10 million verdict in Neff and the blockbuster Caprio win.

However, Gdanski and Hammer served as the powerful common thread through all three of the firm’s Engle victories in 2019.

February’s Mahfuz trial, over Rita Mahfuz’s respiratory disease and cancer, turned, like many similar cases, on whether she smoked by choice or because of addiction. In setting up an award that included $12 million in compensatory damages and $25 million in punitives, Hammer argued the evidence was clear Mahfuz was hooked on nicotine. “There’s not one piece of evidence from either side that Rita’s addiction was her choice,” Hammer said in closings. “Because nobody chooses addiction.”

A month later the pair helped drive a $10 million win for Dorothy Malinkovich’s 1994 cancer death. “They want to talk about Dorothy Malinkovich’s motivation [to quit smoking],” Gdanski said, arguing that the companies should be financially punished for their role in Malinkovich’s death. “What was not sufficient motivation for these companies to do the decent thing and live up to their promises? A million deaths? 5, 20, 30 [million], an ongoing catastrophe of epic proportions in a multi-generational fashion? None of that was even to the slightest degree enough motivation for them to say ‘Hey, enough’s enough.’”

Hammer and Gdanski ended the year with the landmark $157 million verdict in Caprio, the first wrongful death Engle case by a same-sex spouse to go to trial. The award’s $9 million in compensatory damages beat the $8 million requested, while the total award was the largest since 2014. “Horrors leave shadows, especially carcinogenic ones. It’s not something you can just pretend didn’t happen,” Gdanski said in closings that helped secure a $148 million punitive award.

In a monumental Engle year, Gdanski and Hammer’s outstanding courtroom work earned them the share of Engle Plaintiff’s Honors.

Learn how you can watch CVN's unrivaled tobacco litigation coverage, as well as trials featuring the best lawyers across the country.