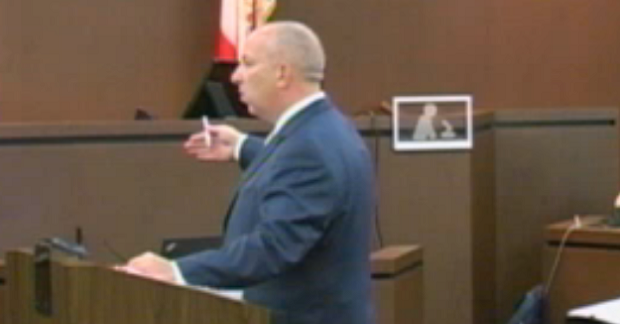 Gary Paige delivers his closing argument on behalf of Jo Freeman in trial against Philip Morris.

Eighth Circuit Judge Toby Monaco granted Philip Morris’ motion for a mistrial after jurors indicated they could not reach a consensus on whether the cigarette company should be liable for punitive damages in the cancer death of David Freeman, a long-time smoker of the company’s Benson & Hedges cigarettes. Jurors had also indicated during questioning that their professed $3 million compensatory award was an attempt at a compromise with regard to punitive damages.

Attorneys for Freeman’s wife, Jo, argued the court should accept a partial verdict, against Philipo Morris on the issue of liability, and declare a mistrial only as to damages. However, Judge Monaco rejected the argument. "Given that the jury is not even unanimous with respect to the compensatory damages amount, I'm going to grant the motion for a mistrial,” Judge Monaco said. “I can’t separate those from the liability issues. I think that’s pretty plain in Florida law that that can’t be done.”

Freeman, 54, died in 1995 of lung cancer that metastasized to his brain. His wife, Jo, claims his cancer was caused by her husband’s decades-long addiction to cigarettes and Philip Morris' participation in a scheme to hide the dangers of smoking.

The mistrial declaration ultimately came about two hours after jurors had returned to the court room with an ostensible verdict that was rejected by one of its members during polling. Judge Monaco sent the jury back to deliberate after delivering an Allen charge.

However, the jury was ultimately unable to reach a consensus.

During Wednesday’s closing arguments, Jo Freeman’s attorney, Gordon & Doner’s Gary Paige, requested up to $10.8 million in compensatory damages, plus a finding that punitives were warranted.

In order to prevail and be entitled to those findings, however, each plaintiff must prove class membership by showing nicotine addiction caused a smoking-related disease such as lung cancer.

Testimony in the eight-day trial focused on when Freeman knew of smoking’s dangers and whether he was addicted to cigarettes or simply chose to smoke. Jo Freeman’s attorneys had contended Freeman began smoking at about 15, the target of a tobacco marketing campaign with an eye toward teenage smokers that dovetailed with a scheme to cast doubt on evidence surrounding smoking’s dangers. They argued that, by the time he knew smoking was dangerous, he was so addicted to nicotine he failed in several quit attempts before his first cancer diagnosis in 1990 drove him to stop smoking for good.

However, the defense argued pointed to periods Freeman didn’t smoke for days or weeks while hospitalized or during quit attempts, as well as his lack of apparent nicotine withdrawal side effects, as evidence he wasn’t addicted. “Why did he smoke, truly?  He liked it, like lots of smokers. He enjoyed it. That is the only testimony in this case, why he smoked, from plaintiff, just that he enjoyed it,” Sastre said.

Learn about CVN's unrivaled library of gavel-to-gavel trial video live and on demand.