Lawrenceville, GA—The family of a 24-year-old electrical worker who was killed when struck by a 1000-pound counterweight in a steel mill was awarded $4.75 million (subject to reduction due to apportionment of fault) by a Gwinnett State Court jury in a wrongful death case against manufacturer Gerdau Ameristeel. James Edward Lanier v. Gerdau Ameristeel US, Inc. (12-C-06887).

Gerdau S.A. is the largest producer of long steel in the Western Hemisphere, operating 58 steel mills in 14 countries, including the United States. The fatal accident occurred on December 9, 2011, at a 300-acre facility in Cartersville, GA, owned and operated by Gerdau’s U.S. subsidiary, Gerdau Ameristeel US, Inc. The deceased worker, Eddie Lanier, was an apprentice electrician working for Action Electric, a Smyrna-based electrical and mechanical contractor that had successfully performed several projects at Gerdau’s Cartersville mill in the past. At the time of Lanier’s death, Action was in the process of replacing a number of fans that were used to cool the steel in a 325-foot-long cooling bed. Lanier was working under the supervision of another Action employee, Michael Harrison, the lead on the project. 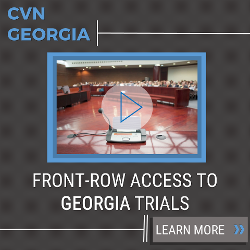 According to statements and evidence in the case, December 9 had been designated by Gerdau as a “down day,” during which the company did not conduct its normal operations, so that Action and other contractors could perform work without being in the presence of live machinery. Under Gerdau’s safety policies, one of the company’s employees, Chad Hughes, was required to complete a “lockout/tagout” procedure, designed to secure all potential energy sources, before Action and other contractors could begin work. As part of the procedure, Hughes released a series of 1000-pound counterweights that were part of the machinery used to move steel along in the cooling bed. One of those weights struck Lanier in the back, and he died shortly afterwards.

Under plaintiff’s theory of the case, as outlined in Cale Conley’s opening statement, Gerdau failed to maintain a safe premises. On the day of Lanier’s death, Michael Harrison met with Chad Hughes, after which Hughes left to begin the lockout/tagout process. However, for a number of reasons, Hughes was delayed and did not actually start the process until nearly an hour later. Further, neither Harrison nor Lanier knew what the process entailed. The fans ran the length of the cooling bed and could only be accessed by walking down a flight of stairs from the main mill floor. There was an unlocked gate in front of the stairwell with a sign saying “Authorized Entry Only.” That day, while waiting for Hughes, Harrison and Lanier went down the stairs to examine the fans. Once in the basement, they walked down a line shaft that ran the length of the bed to check out the fans at the far end of the cooling bed. The accident occurred while the two men were looking up at the fans that were over their heads.

According to Conley, Harrison and Lanier had no warning that they were going into a dangerous area. Gerdau failed to lock the gate or install any fences or put up any warning signs. Further, Hughes did not know where Harrison and Lanier were, could not communicate with them in any way, and could not see if anyone was on the lower level when he released the counterweights. In Conley’s view, Harrison, who was authorized to work on the fans, could assume that that he and Lanier were authorized to be on the lower level to prepare for the actual work. Conley continued, “Mr. Hughes never said, ‘Hey, don’t go down to the cooling bed; hey, that area is off limits.’ … He said none of those things. He said, ‘Go prepare for the job.’ And they did. … You will hear Mr. Harrison say, ‘I thought if there was any danger of moving equipment, there would be signs or something up to tell me. … I’m not going to start working yet, but it would be good to be prepared.’”

Conley further noted that Gerdau had not complied with several key OSHA regulations, one of which required Hughes to ascertain the status of Harrison and Lanier and notify them before releasing the counterweights “The purpose, the reason for the OSHA regulation that says notify people … ascertain people is because it’s foreseeable people will not always be where you want them to be. It’s a reality. That’s why they have these regulations.”

In his opening statement, Gerdau’s attorney Warner Fox, while agreeing that the accident was a tragedy, placed the responsibility for it on Harrison and Lanier. “Mr. Michael Harrison, the lead man, and … Mr. Eddie Lanier, the apprentice, that they failed that day … to exercise personal responsibility for their own safety. And unfortunately, that resulted in Mr. Lanier getting killed that day out at the mill. It’s really a very simple case as we move through it. And that is we had rules and procedures and policies in place at Gerdau that were designed to prevent exactly what happened. And there’s not going to be any dispute about the fact that Michael Harrison and Eddie Lanier knew those rules and knew them well.”

Fox noted that Harrison and Lanier had been at the mill several days previously, and they knew the lockout procedure quite well. If they had followed the same procedure that day, the accident would not have happened. He also pointed out that both Harrison and Lanier had done work at Gerdau on numerous previous occasions because Action often did work for Gerdau. Fox stated that Gerdau had certain “cardinal” safety rules, the most important of which was that workers were not supposed to go down into the cooling bed area until the lockout procedure was completed. Fox agreed that the counterweights were dangerous, but noted that once lockout/tagout was completed, the weights could no longer move. “[The lockout rule is] incredibly important to Gerdau because it protects not only the Gerdau employees but it protects the contractors. And they both understood that. There were no excuses; there were no exceptions.”

Fox also explained that the lockout procedure was a multi-step process and it was not feasible for Hughes to verify the locations of contractors every step of the way. Instead, Hughes informed Harrison that he was starting the lockout process and that, therefore, Harrison should not have gone into the cooling bed area, something he had never done previously, until the process was complete.

After six days of testimony, the jury returned a plaintiff’s verdict in the amount of $3.75 million for the full value of Lanier’s life and $1 million for pain and suffering, for a total of $4.75 million. They also assigned 75% of the responsibility for the accident to Gerdau, 20% to Action Electric and Harrison, and 5% to Lanier, which will result, under Georgia law, in a reduction of the final judgment.

After the trial, plaintiff's attorney Cale Conley told CVN: "Nothing will replace Eddie Lanier and everything he meant to his family and friends, but the family is grateful the jury reached a verdict that recognized Gerdau’s fault for Eddie’s death and the valuable life that was lost as a result." Representatives of the defense were unavailable for comment prior to the publication of this article. Steve Silver can be reached at ssilver@cvn.com.