The right demonstratives can be critical to ensuring your jury connects with your case. But choosing those demonstratives and incorporating them effectively can be a challenge. That’s why, on Thursday May 20, at 1 p.m. Eastern, Lloyd Bell and Michael Geoffroy will do a deep dive into choosing and using trial-winning demonstratives.

Bell, of the Bell Law Firm, is well known for his creative, powerful demonstratives that help set up blockbuster verdicts. Using video from his biggest trials, and joined by veteran trial attorney Michael Geoffroy, of MG Law, he’ll break down his approach to demonstratives. And the pair will discuss the most effective ways to use demonstratives across a range of cases.

The topics they’ll discuss include:

There will also be time for questions.

This free webinar is for any attorney looking to improve their trial technique by better incorporating demonstratives throughout every phase of trial.

Register for this free webinar now. 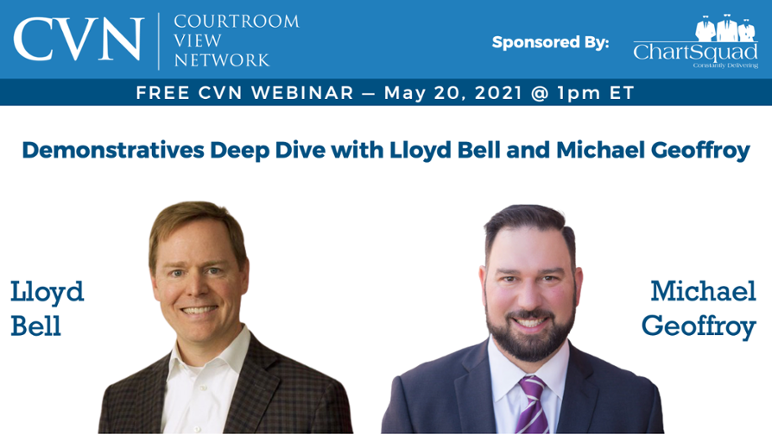 Lloyd Bell, the founding partner of the Bell Law Firm, has spent more than 25 years in trial practice. He is a member of the Inner Circle of Advocates, and the second Georgia attorney ever inducted into the organization, comprised of the nation's best plaintiff's attorneys. His notable trials include a $26 million verdict for a woman who suffered brain damage after complications with a blood clot, and a $15 million award for a man paralyzed in a fall from a medical exam table.

MG Law’s Michael Geoffroy is a trial lawyer practicing in Atlanta, Conyers, and Covington, Georgia for more than 20 years. He was a founding instructor of the State Bar of Georgia Leadership Academy and founding Chair of the Georgia Trial Lawyers LEAD program. He has been recognized by the Georgia Pro Bono Legal Project and Young Lawyers Division of the State Bar of Georgia with their Signature Service Award.