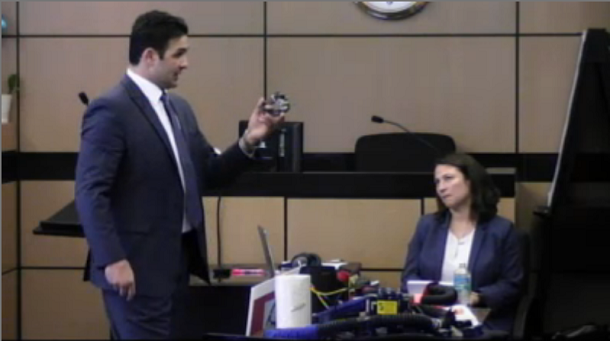 Dustin Herman delivers the opening statement in trial over the death of underwater filmmaker Wesley Skiles, who drowned in 2010. Skiles' wife, Terri, claims her husband died because of a defective rebreather made by Dive Rite.

Wesley Skiles, a diver and cinematographer with more than 7,000 dives and 100 films to his credit, died during a dive off Boynton Beach, Florida in July 2010 while filming a documentary for National Geographic. His widow, Terri Skiles, claims her husband drowned when oxygen sensors and electronics on Dive Rite "O2ptima" brand rebreather failed.

During Monday's openings, Spangenberg, Shibley & Liber's Dustin Herman said Skiles drowned while ascending from an 83-foot dive when the O2ptima rebreather shut off oxygen minutes before he lost conciousness.

Herman said an oxyygen sensor on the rebreather was known to deliver incorrect readings and work improperly when covered in water. “That’s why this defect is such a dangerous one, because it’s a transient failure," Herman said." Divers don’t even know that the rebreather has failed, because they are still getting signals, everything looks OK, but there might be a dangerous level of oxygen in the rebreather, and the water might come off later and the oxygen returns to a safe level and the diver had a close call and never knew it.”

Herman, who requested up to $25 million in damages during Monday's openings, said Dive Rite placed the rebreather on the market without properly testing it. "You don’t know if it’s broken until somebody needs those alarms and they don’t work," Herman said. "If water is on the electronics and the diver needs those alarms, the diver dies.”

The defense argues diver error, rather than than defective equipment, caused Skiles' death. During Monday's openings, Concannon & Charles' David Conannon told jurors post-accident tests showed the equipment worked properly. By contrast, Concannon claimed, Skiles rarely used rebreathing equipment and was not certified to use the O2ptima, which he borrowed from a colleague because a rebreather was required for the project. "He was a lousy rebreather diver," Concannon said, noting Skiles typically dove with open-circuit equipment. "He did not like rebreathers. He did not like to use them; he did not like to use them for filming."

Concannon argued Skiles, whom he accused of using prescribed pain killers at twice therapeutic levels and diving on less than five hours of sleep, manually turned the rebreather off and forgot to restart it on his ascent. "As you watch the video [of Skiles' dive], you'll see he's making mistakes the whole time," Concannon said. "Is it because he's impaired? Is it because he's inexperienced?"