With more than a dozen million-dollar-plus verdicts captured by CVN cameras in Georgia throughout 2015, the field was crowded with worthy candidates for CVN Georgia's Plaintiff's Attorney of the Year honor. This year's winner earned the distinction with a landmark award in a products liability case that made headlines across the country. 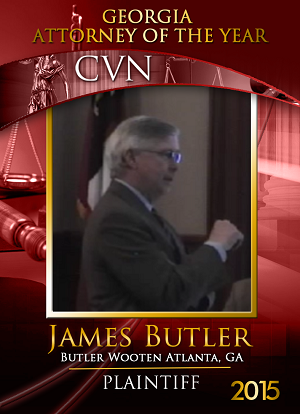 The verdict: $150 million against Chrysler for the death of two-year-old Remington Walden in a Jeep Cherokee fire.

The details: The case, which alleged Chrysler knew the gas tank placement on its 1999 Jeep Cherokees posed a deadly fire hazard but did nothing to rectify the situation, garnered coverage nationwide.

With a powerful case that included an incisive examination of Sergio Marchionne, CEO of Fiat Chrysler, the defendant's parent corporation, and a towering closing argument, Butler convinced the jury of what he termed the company's "conscious indifference" to the life of Remington Walden.

With his monumental performance in the landmark case, Butler stands tall as CVN Georgia's Plaintiff's Attorney of the Year.