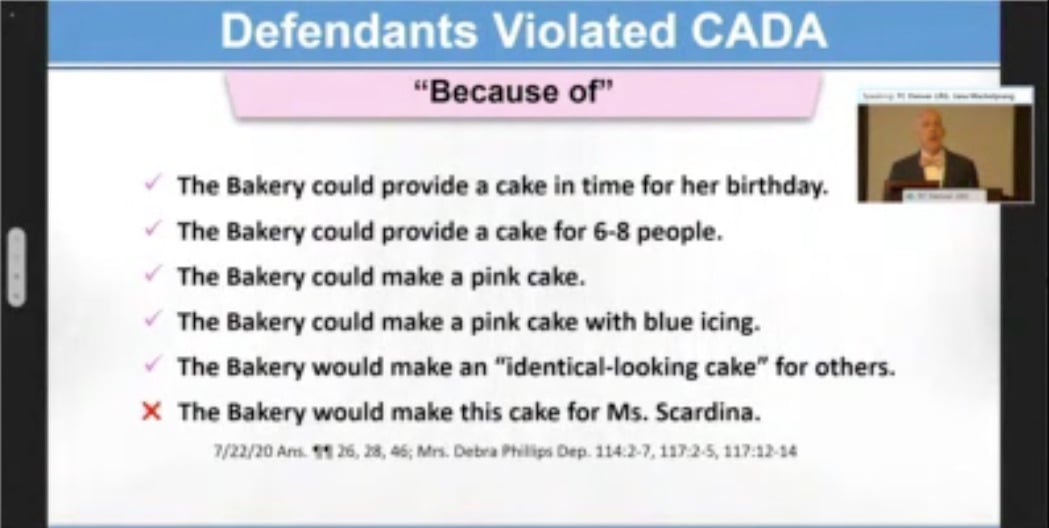 Denver, CO - A Colorado state court judge on Tuesday ruled that a Christian bakery owner who refused to sell a cake to a transgender woman violated a state anti-discrimination law, following a virtual trial in March that was recorded gavel-to-gavel by Courtroom View Network.

Denver District Judge A. Bruce Jones, who heard the case without a jury, determined that Masterpiece Cakeshop owner Jack Philliips’ refusal to sell a cake to plaintiff Autumn Scardina celebrating her gender transition warranted a $500 fine, which Philips has vowed to appeal.

The case began in 2017 when Scardina, an attorney, decided to buy a cake from Phillips, who at the time was bringing a separate case regarding service to LGBT customers before the United States Supreme Court.

Phillips refused to sell Scardina a cake that was blue on the outside and pink on the inside, testifying at trial that he felt people cannot change their gender and that he refused to support “somebody who thinks they can,” according to Courtroom View Network’s webcast of the proceedings.

“The anti-discrimination laws are intended to ensure that members of our society who have historically been treated unfairly, who have been deprived of even the every-day right to access businesses to buy products, are no longer treated as ‘others,‘ ” Jones wrote in his decision.

Jones determined the cake decorations requested by Scardina are not a form of “compelled speech,” meaning Philips lacked a valid 1st Amendment claim which could supersede the state law.

“The anti-discrimination laws are intended to ensure that members of our society who have historically been treated unfairly, who have been deprived of even the every-day right to access businesses to buy products, are no longer treated as ‘others,'” he wrote. “This case is about one such product — a pink and blue birthday cake — and not compelled speech.”

In a statement to the media, Scardina’s attorney John McHugh of the Reilly law firm welcomed the judge’s ruling, which imposed the maximum possible fine on Phillips.

“This is about a business that is open to the public that simply says to an entire class of people in the community that your identity, who you are, is something that is objectional,” he said.

“Radical activists and government officials are targeting artists like Jack because they won’t promote messages on marriage and sexuality that violate their core convictions,” the group’s general counsel said in a statement.

The full three-day trial is available with a subscription to CVN’s trial video library, which also includes gavel-to-gavel recordings of hundreds of civil trials from courts throughout the United States.