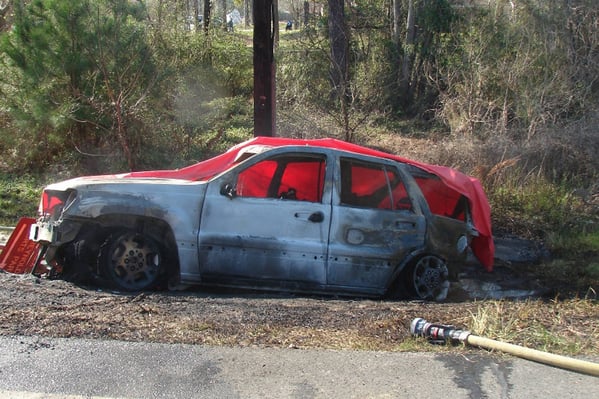 The 1999 Jeep Grand Cherokee that Remington Walden was riding in when the vehicle's fuel tank exploded after a rear-end collision.

Bainbridge — Attorneys for the parents of a child killed in a fire caused by an exploding Jeep fuel tank asked a Georgia state court judge at a hearing on Tuesday to reject Fiat Chrysler Automobile’s request for a new trial after a jury socked the company with a $150 million verdict earlier this year, while also leaving the door open for a reduction in the landmark award.

During a lengthy hearing that was occasionally punctuated by the tolling of the county courthouse bell, attorneys for Remington Walden’s parents and Chrysler sparred over whether a redo should be granted in the case, with the automaker arguing the verdict vastly exceeds any other in the history of the state. Jim Butler of Butler Wooten Cheeley & Peak, representing Bryan Walden and Lindsay Newcombe Strickland, told Judge Kevin Chason that while a $100 million reduction in the award would be reasonable, the underlying jury verdict was not unfounded.

Last April a Decatur County jury hit Chrysler with the $150 verdict in the first case to go to trial over allegedly defective fuel tanks in older model Jeep vehicles. Walden’s parents sued Chrysler after he burned to death in 2012 while strapped into his child safety seat following a rear end collision. They claimed Chrysler knew fuel tanks mounted near the back of Jeeps could explode in relatively low-impact collisions, but did not adequately inform the public.

While Butler served as lead counsel for the plaintiffs during the trial, Chrysler brought in a new face to represent them at the hearing on the company’s motion with Thomas Dupree of Gibson Dunn & Crutcher’s Washington, D.C. office, a specialist in high-stakes appellate litigation.

Dupree argued that jurors were motivated by improper references to the personal wealth of Chrysler chief Sergio Marchionne, and that Butler improperly asked them to punish the company and prevent future misconduct, which Dupree argued amounted to punitive damages that were not permitted in the case. The jury awarded $120 million for Remington’s death and $30 million for his pain and suffering.

“The jury returned a grossly irrational and excessive verdict,” Dupree said. Chrysler wants the award reduced to $5 million or to re-try the case, according to their court filings.

However Butler said Chrysler’s motion mischaracterized his actual words used during key points at the trial, often substituting portions of the actual transcript with what Butler characterized as ellipses and omissions. He argued the jury was specifically instructed to only compensate for Walden’s death and suffering, and that Georgia law assumes juries comply with instructions from the judge.

Tuesday’s hearing is the latest development in the growing scrutiny Chrysler faces over the supposed dangers of fuel tanks like the one in the Walden’s 1999 Jeep Grand Cherokee. The automaker announced a recall of roughly 1.5 million Jeeps in 2013 following pressure from federal regulators, due to the fire risk from leaking fuel tanks in the event of a rear-end collision, but the 1999 Jeep Grand Cherokee was not recalled. Instead Chrysler offered to install trailer hitches on the vehicles to provide better crash protection.

The ground shaking verdict in the Walden case helped bring the National Highway Traffic Safety Administrations' attention back on older Jeeps that were not recalled, and at a hearing on July 2 federal regulators said the company had violated auto safety laws and could be on the hook for up to $700 million in penalties. The agency’s decision remains pending.

The second trial over Jeep fuel tanks is scheduled to start next January in California, according to court records.

Judge Chason remained largely silent during the hearing. He did not rule from the bench and asked the parties to submit any additional briefs by this Friday.

The plaintiffs are represented by Jim Butler and David Rohwedder of Butler Wooten Cheeley & Peak.

The case is James Bryan Walden and Lindsay Newcombe Strickland, on behalf of Remington Cole Walden v. Chrysler Group LLC, case number 12-CV-472, in the Superior Court of Decatur County in the State of Georgia.

David Siegel can be reached at dsiegel@cvn.com.