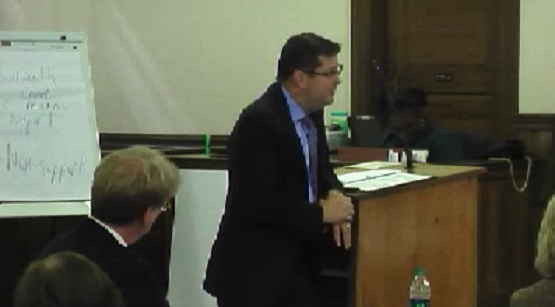 James Gustafson tells jurors they should award $13.2 million in punitive damages in his client Dianne Webb's wrongful death suit against R.J. Reynolds. The jury ultimately awarded $450,000 in punitives. Click here to view a clip from his closing argument.

Webb’s suit against Reynolds stemmed from the 1996 death of her father, James Kayce Horner, a long-time smoker of Reynolds-brand cigarettes. A 2010 trial in the case found that the tobacco manufacturer’s concealment of smoking’s dangers caused Horner’s nicotine addiction and fatal lung cancer. A Florida appellate court reversed the $80 million damage award in that trial, which included $8 million in compensatories and $72 million in punitives, but upheld the finding of liability on the merits, setting the stage for this month’s retrial solely on damages

In his closing argument Thursday, Gustafson contended that the punitive damage figure should be tied to Reynolds’s dividend payments, which he said amounted to $13.2 million. Calling the jury the “conscience of the community” Gustafson reminded them of evidence that Reynolds and other tobacco manufacturers hid the dangers of smoking while profiting from a product they knew was unsafe. "(Reynolds executives) did what they did for money. They knew people were going to die. They didn't care how many. They didn't care who it was. That was their attitude," Gustafson said. "But you get to adjust it, you see. You get to do something about that."

Furr argued that, if jurors believed punitives were necessary, they should award an amount “reasonably related to the compensatory award,” which he suggested would be between $450,000 and $900,000.

With its verdict, the jury ultimately accepted that suggestion.