Engle Progeny Review for the Week of October 13

Each Friday we highlight the week's Engle progeny cases, examine their importance in the larger scope of the litigation, and look ahead to next week. 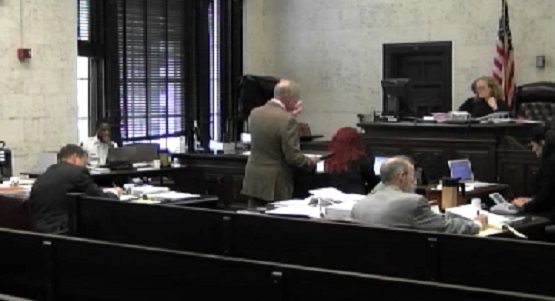 Philip Gerson, representing plaintiff Tina Russo, speaks during pre-trial motions of Russo v. Philip Morris. Retrial of the case is underway while the Florida Supreme Court weighs an appeal from the first trial regarding the state's law of repose.

Over the course of the next few weeks, two panels at opposite ends of the state will consider Tina Russo’s suit claiming that cigarettes and tobacco industry secrets caused her mother’s respiratory disease. While jurors in Miami decide the facts in the case’s retrial, the Florida Supreme Court considers a question from the first trial that will impact hundreds of similar suits: How much fraud must an Engle smoker believe?

The Background: Fraud, Repose, and Engle

Fraud is a common claim in an Engle progeny complaint. It’s usually predicated on allegations that tobacco industry defendants conspired to hide the dangers of smoking for decades.

In suing for fraud under Florida law, a plaintiff must typically show both fraud and a reliance on the defendants’ fraudulent conduct. In addition, under Florida’s statute of repose, a plaintiff suing for fraud must show that the fraud occurred within 12 years of the date the complaint is filed. Since Engle progeny plaintiffs are all deemed to have filed suit when the original Engle class action complaint was filed, May 5, 1994, the Engle progeny repose cutoff date is May 5, 1982.

However, when the Florida Supreme Court decertified the original Engle class action suit on appeal, it ruled that Engle progeny members could nonetheless rely on certain jury findings in that original verdict. Among those is the finding that tobacco companies committed fraud both before and after May 5, 1982.

Engle plaintiffs’ attorneys argue that this finding is enough to defeat the statute of repose if a smoker ever relied on what the original Engle jury found to be fraud. Under this argument, for example, a smoker who proves she believed tobacco industry statements about cigarettes when she began smoking in 1960 doesn’t need to prove she believed those statements after May 5, 1982.

The State is Split

The state’s district courts of appeal have fallen on different sides of the argument. In 2013, the Third District Court of Appeal set aside a defense verdict in the original Russo trial. However, it also found that the trial judge correctly refused to instruct the jury on the repose issue. The Third District concluded that Phyllis Frazier, the smoker at the heart of the Russo suit (and the original plaintiff prior to her death), did not need to prove reliance on fraud after the repose date.

By contrast, the Fourth District Court of Appeal, in Hess v. R.J. Reynolds, concluded that Engle progeny plaintiffs are required to prove specific reliance after the repose date to win a fraud claim.

The Florida Supreme Court certified both cases for review, and in oral arguments on the issue in April, grilled attorneys on the intent of the repose statute, its relation to a cause of action, and how that applies to Engle progeny cases.

A Retrial in Russo

Nearly six months after arguments, the high court still hasn’t issued a decision. The retrial in Russo will go ahead, with opening statements expected sometime early next week. If the state’s supreme court hasn’t ruled by the time the case goes to the jury, the judge will likely instruct the jury to render two sets of findings on the repose issue. The jury’s verdict in Tina Russo's suit will help settle the matter for her and her family.

And, at the other end of the state, the supreme court’s eventual decision in Russo will settle the matter of fraud and repose for the hundreds of Engle suits to come.

Next Week: Jury selection continues Monday with opening statements expected to begin before the middle of next week.