Which Jones Day Attorney Is Spotlighted on Our Newest Engle Tobacco Litigation Card?

CVN’s video cameras have covered the gavel-to-gavel action of nearly every Engle progeny trial — litigation spun from a massive Florida class action against the nation’s tobacco companies. And over the years, our Engle cards have honored many of the best lawyers involved in those high-stakes cases. This week’s release in our newest Engle card series features a tobacco defense attorney with a stellar winning record through six years of Engle trials. 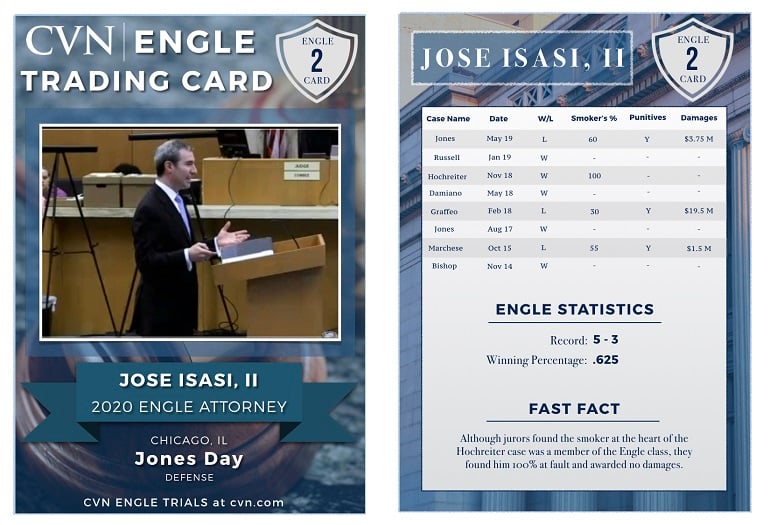 Since his first CVN-covered Engle defense verdict in 2014’s Bishop case, Jones Day’s Jose Isasi has built an outstanding 5-3 record representing R.J. Reynolds. Key to that run of success is a three-trial winning streak that ran from May 2018 through January 2019. That streak also included an unusual verdict in Hochreiter. There, jurors found the smoker at the heart of the case was an Engle class member whose nicotine addiction caused his cancer, but they assigned 100% of responsibility to the smoker himself, and refused to award damages.

His most recent win came in January, where he cleared Reynolds of responsibility in a $15 million-plus claim over the cancer and respiratory disease suffered by a Vietnam vet who’d smoked up to three packs of cigarettes a day for much of his life.

Come back next week to discover who will feature on our next Engle card.

Learn how you can access an unrivaled tobacco trial video library, along with hundreds of other high stakes trials featuring the country's best attorneys.