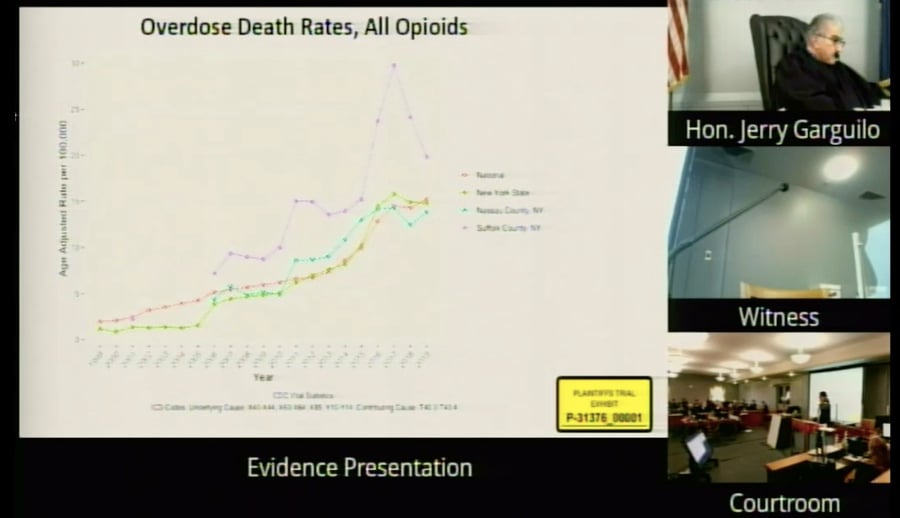 Only defendant Teva Pharmaceuticals remains in the trial that began nearly six months ago and originally included companies like Johnson & Johnson and Endo Pharmaceuticals. New York Attorney General Letitia James and various New York counties accused the companies of creating a “public nuisance” by marketing and distributing narcotics they knew to be dangerously addictive.

The drug companies deny the allegations, arguing that opioid-based painkillers are fully approved by the FDA and have been used to successfully treat many patients who did not develop addictions.

The New York trial marks the first time a jury will decide an opioid-related lawsuit against major pharmaceutical companies. All opioid trials to date, including a trial currently underway in Seattle being webcast gavel-to-gavel by CVN, have taken place without juries.

Jayne Conroy of Simmons Hanly Conroy, representing Suffolk County, noted that the sprawling trial could be the longest in the state’s history. Justice Jerry Garguilo has been presiding over the in-person trial in a modified law school auditorium to accommodate pandemic-related physical distancing.

The jury’s eventual verdict will be an important test of the “public nuisance” strategy used by states and municipalities to hold drug companies accountable for opioid-related mediation costs.

Following that decision the Oklahoma Supreme Court threw out a landmark award against Johnson & Johnson from the first civil opioid lawsuit against a drug company, a trial that was also filmed by CVN.

Both of those trials, along with openings and closings in the New York case and the Seattle trial currently underway, are available with a CVN subscription.

Closings in the New York case are expected to resume Monday morning.

The New York case is captioned In Re Opioid Litigation, case number 40000/2017,  in the Supreme Court of New York, Suffolk County.