Jury Clears Subaru Over SUV That Burst Into Flames, Killing 3 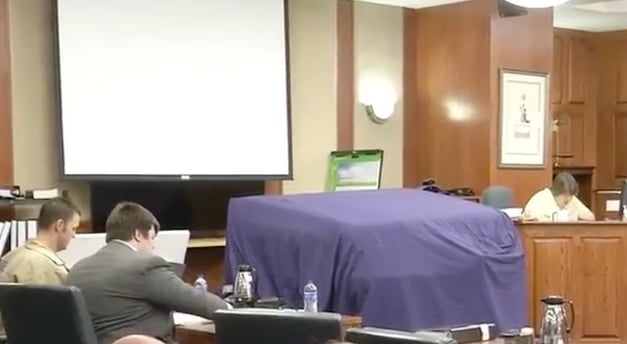 A blue tarp covers the front section of a Subaru Forester that was brought into Judge Jennifer Bailey's fourth floor courtroom.

Charleston — A West Virginia state court jury has determined that Subaru is not responsible for the deaths of three passengers who died in a fire after their 1999 Forester sport utility vehicle was struck in a head-on collision.

The Kanawha County jury reached their verdict on February 2 following nearly two weeks of testimony. The families of Carole Lynn Crawford, 46, her daughter Meaghan McGuire Crawford, 16 and family friend Kelsey Rebecca Kuhn, 15, filed a product liability lawsuit against the car manufacturer in 2011 claiming the allegedly defective design of the Subaru Forester contributed to their relative’s deaths.

The mother and two teenagers died in 2009 when a Ford Explorer crossed the center line and struck their Forester head-on. Subaru vehemently denied that the Forester’s design was defective and argued in court filings that the driver of the Ford Explorer bore sole responsibility for the fatal crash and resulting fire.

The Explorer’s driver, Erma Marie Brown, is currently serving a 30 year prison sentence after pleading guilty to driving under the influence of prescription painkillers.

The full trial was recorded gavel-to-gavel by Courtroom View Network.

During the trial attorneys for the plaintiffs described to jurors how the force of the collision with the Explorer launched the Forester over a small embankment, and how despite the efforts of good samaritans the passengers, who the would-be rescuers heard crying out in the flames, could not be freed from the car.

The proceedings took on a decidedly hands-on feel when attorneys began examining the front section of a Subaru Forester that had been cut off and transported to the tight confines of Judge Jennifer Bailey’s fourth floor courtroom. A blue tarp covered the unusually large exhibit for most of the trial.

Only product liability claims against Subaru remained when the case went before the jury, however the plaintiffs’ original complaint also included negligence claims against the doctor who prescribed painkillers to Brown and the pharmacies that filled them.

Brown had previously been involuntarily committed due to opiate abuse, according to court filings, which attorneys for the plaintiffs claim should have precluded the physician from prescribing additional opiate-based medications.

Those claims were resolved prior to the start of the trial.

The full trial was recorded gavel-to-gavel by CVN, and will be available for on-demand viewing, along with many other automotive product liability cases, as part of CVN’s one-of-a-kind online video archive of high-stakes, real-world civil trials.

Subaru is represented by Christopher Spencer and Adam Lounsbury of Spencer Shuford LLP and by Philip Combs of Thomas Combs & Spann.