CVN's 2018 Georgia trial coverage saw some of the best defense attorneys, in the state and throughout the country. This year, CVN honors not one, but two defense attorneys for their outstanding work in high-stakes Georgia cases. 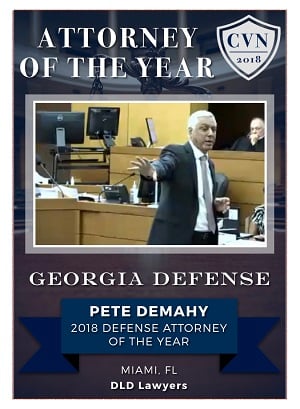 The Verdict: Jurors cleared industrial manufacturer Milliken & Company of responsibility in the first case to go to trial over a plane crash that killed 5 people.

The Details: Heidi McCorkle was one of 5 people killed in a 2013 plane crash, after the jet in which they were traveling struck a utility pole on land owned by Milliken.

McCorkle's family argued the company allowed Georgia Power, which was not a party at trial, to place the pole at a height that violated an aviation easement Milliken had given to a neighboring airport.

However, during trial in Fulton County State Court, DLD Lawyers' Pete DeMahy detailed records he said showed that the pole was not subject to a 50-foot restriction, as plaintiffs claimed, and that Milliken properly relied on Georgia Power's expertise in placing the pole. “We’re talking about Georgia Power; we’re not talking about 'Steve’s Electrical Company' down the street here,” DeMahy said as trial opened. “These are the experts.”

More importantly, DeMahy argued, the restriction was irrelevant, because, he said, pilot error, not pole height, caused the crash. DeMahy highlighted evidence he said showed the non-party pilot was flying under fatigue and made critical errors leading up to the crash. "He violated every rule, every [element of] training, every checklist," DeMahy said. "That's the cause of this accident. That's the person who should be here."

DeMahy's stellar courtroom work keyed a defense win in a case where plaintiffs requested more than $18 million in damages. 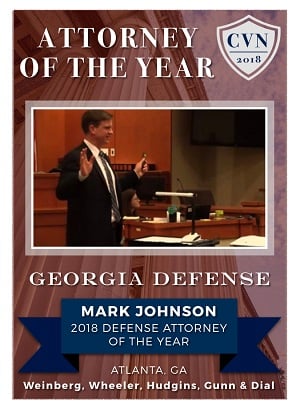 The Verdict: Jurors apportioned only 1% of responsibility, on a $4 million total award, to defendants, owners and managers of an apartment complex where a tenant was shot and killed.

The Details: Kevin Pierre, a tenant of Bradford Gwinnett Apartments & Townhomes, was fatally shot on the complex's property after a fight in which he was not involved broke out on the roadway alongside the complex. Pierre's family argued the defendants, who owned and managed the complex, had ignored rampant crime in the area and on the property for years, and were responsible for the the shooting. The individuals allegedly involved in the gunplay were not parties at trial.

But Weinberg Wheeler's Johnson walked jurors through security measures the owners had taken to control crime on the property. And, he argued there was nothing the apartment owners and management could have done to prevent the shooting, which originated on a public roadway, over which Johnson said the defendants had no control.

In closings, Johnson addressed each security feature plaintiffs argued the complex should have implemented. Cameras, Johnson said, would not have stopped the shooting. And, "the only fence that would make any difference in this case is a bulletproof fence,” Johnson said, highlighting the implausibility of the idea.

Johnson acknowledged the tragedy underlying the case. But he urged jurors not to blame the defendants for a shooting he told them was senseless. "This property wasn't perfect. This property had issues. But [defendants] are not to blame for a drive-by shooting," Johnson said in closings. "That's not fair. That's not justice."

Watch high stakes trials in Georgia and across the country, for as little as $99 a month.

More Florida Courts Are Bringing Jurors Back to the Courthouse