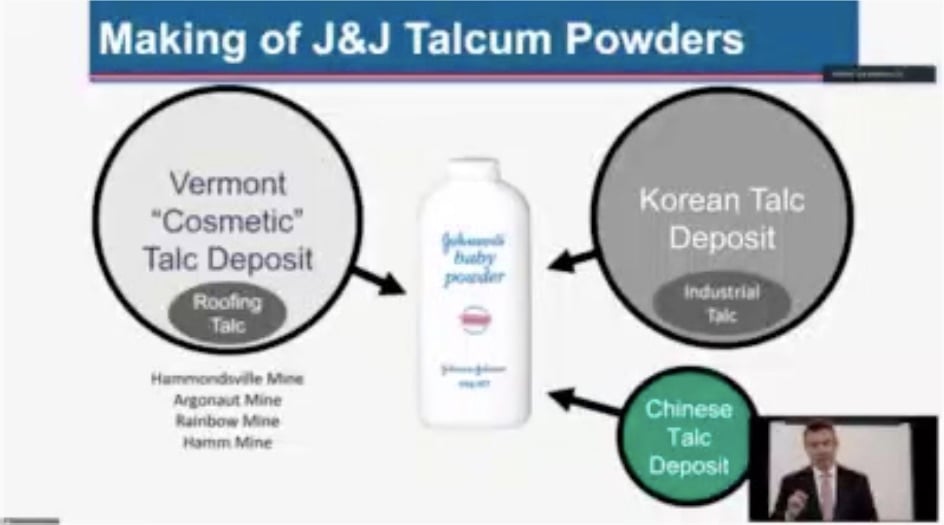 In addition to J&J defendants also include retailers Safeway, CVS-owned Longs Drugs and Lucky Stores, along with O’Reilly Auto Parts and Bendix Corporation.

Satterley asked jurors to award an unspecified amount of damages in the millions, arguing that J&J, the retail stores and automotive defendants knew about the dangers of asbestos in their products but failed to warn consumers.

Brown asked jurors how an exceedingly rare cancer like Reyes’ could be caused by such a widely distributed product. She said Reyes suffers from a specific type of mesothelioma that sees less than 50 diagnoses annually in the United States.

In many ways the proceedings seemed familiar compared to the numerous cosmetic talc trials to date, the majority of which CVN webcast and recorded. However the myriad variables associated with an entirely virtual trial move this case into largely uncharted territory. As of Wednesday afternoon the proceedings moved along without incident, with attorneys for the retailers and automotive companies still to deliver their opening statements.

The defendants opposed holding the trial virtually, citing irregularities in two previous non-talc asbestos trials recently held in Alameda County. One trial ended in a defense verdict, and the other in a $2.5 million verdict, with appeals courts yet to weigh in on either outcome. Judge Stephen Kaus pressed forward with the current talc trial in light of Reyes’ rapidly failing health. The case received expedited consideration after being filed less than a year ago.

The daily trial proceedings are being webcast both live and on-demand by Courtroom View Network, and the developments will be closely monitored by plaintiff and defense attorneys to determine the viability of virtual trials for talc cases. Despite J&J settling 1000 talc cases earlier in October for $100 million there are still thousands more talc cases pending throughout the country.