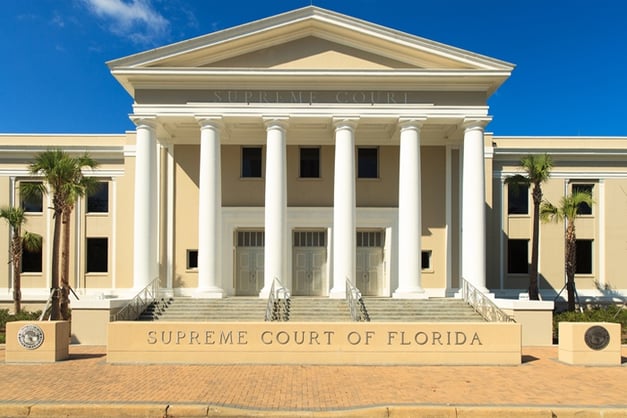 Tallahassee —The Florida Supreme Court on Thursday shot down an argument from R.J. Reynolds that thousands of liability and negligence claims against the tobacco company are preempted by federal law, allowing the lawsuits to continue working their way through Florida’s state courts.

In a unanimous 33-page opinion affirming a ruling from the Fourth District Court of Appeal, Chief Justice Jorge Labarga rejected RJR’s position that the decision by Congress to regulate but not ban the sale of cigarettes precludes  tort claims under state law.

The decision keeps intact the $3.48 million awarded to the estate of deceased smoker Phil Felice Marotta in 2013 but has broader implications for thousands of so-called “Engle” plaintiffs who filed individual lawsuits against various tobacco companies, after the Florida Supreme Court overturned a historic $145 billion class action award in 2006.

“While Congress did expressly preempt state and local regulations pertaining to the labeling and advertising of cigarettes, there is no indication that Congress had a 'clear and manifest purpose' to insulate the tobacco industry from state tort liability. “Justice Labarga wrote. “Strict liability and negligence claims, such as those brought by Marotta under Engle, do not interfere with the regulation of advertising and promotion of cigarettes and, therefore, do not clearly conflict with congressional objectives.”

Thursday’s ruling runs counter to an April 2015 decision from the U.S. Court of Appeals for the Eleventh Circuit in Graham v. R.J. Reynolds, setting up a possible eventual appeal to the U.S. Supreme Court. The 11th Circuit held in Graham that federal law does preempt state liability and negligence claims, since they supposedly undermine the decision by lawmakers to keep cigarettes on the market.

However In 2016 the 11th Circuit agreed to reconsider the case en banc, and a final ruling from the full court is still pending.

Justice Labarga agreed with the Marotta trial judge who rejected the Eleventh Circuit’s conclusion that state governments cannot ban a product that Congress has chosen to regulate, citing federal regulation of alcohol as an example. He determined that lower courts correctly interpreted the Federal Cigarette Labeling and Advertising Act of 1965 and 2009 Family Smoking Prevention and Tobacco Control Act as not being incompatible with state tort law.

The opinion specifically refers to “savings clauses” in the legislation meant to protect the ability of states to regulate tobacco beyond federal manufacturing and labeling requirements.

“Strict liability and negligence claims, such as those brought by Marotta under Engle, do not interfere with the regulation of advertising and promotion of cigarettes and, therefore, do not clearly conflict with congressional objectives,” the ruling states. “This determination is consistent with congressional intent as evidenced by Congress’s explicitly stated purpose of the FCLAA, and also with the inclusion of “savings clauses” in the legislation that preserves product liability actions under state law.”

Labarga rejected RJR’s argument that Engle liability claims are based only on the inherent dangers of cigarettes, instead finding that the core of the Engle claims rests on allegations that tobacco companies knowingly increased the amount of nicotine in their products to ensure that consumers became addicted.

“Reynolds concedes that federal law does not preempt all product liability claims against cigarette manufacturers, such as those based on a theory of defect narrower than the inherent dangerousness of all cigarettes,” Labarga wrote. “Therefore, a critical question is whether Engle defendants’ liability is based solely on the inherent dangers of cigarettes. We hold that it is not.”

Thursday’s opinion also overturned rulings by the trial court and the 4th DCA that Marotta could not seek punitive damages, finding that the 2016 decision by the Florida Supreme Court in Soffer v. R.J. Reynolds held that individual members of the Engle class action are not prevented from seeking punitive damages on all claims properly raised in their subsequent individual actions.

Richard Rosenthal of The Law Offices of Richard B. Rosenthal in Miami, who represented the Marotta family, told The Daily Business Review that despite the looming en banc ruling from the 11th Circuit, Thursday’s decision is a major win for Engle plaintiffs.

"The Big Tobacco defendants have failed nearly a dozen times to essentially strangle the Engle class action lawsuit," Rosenthal said. "So they've switched strategies by trying now to hobble and dismember it instead. But fortunately, today's unanimous ruling blocks Big Tobacco's most recent attempt. So that's great news for thousands of injured Floridians."

Only six justices of the seven-member court signed the unanimous opinion. Justice C. Alan Lawson did not participate after only being officially sworn in on Wednesday.

The Marotta trial, like most Engle tobacco trials to date, was recorded and webcast by Courtroom View Network.

RJR is represented by Charles R.A. Morse of Jones Day and by Eric L. Lundt and Robert C. Weill of Sedgwick LLP.